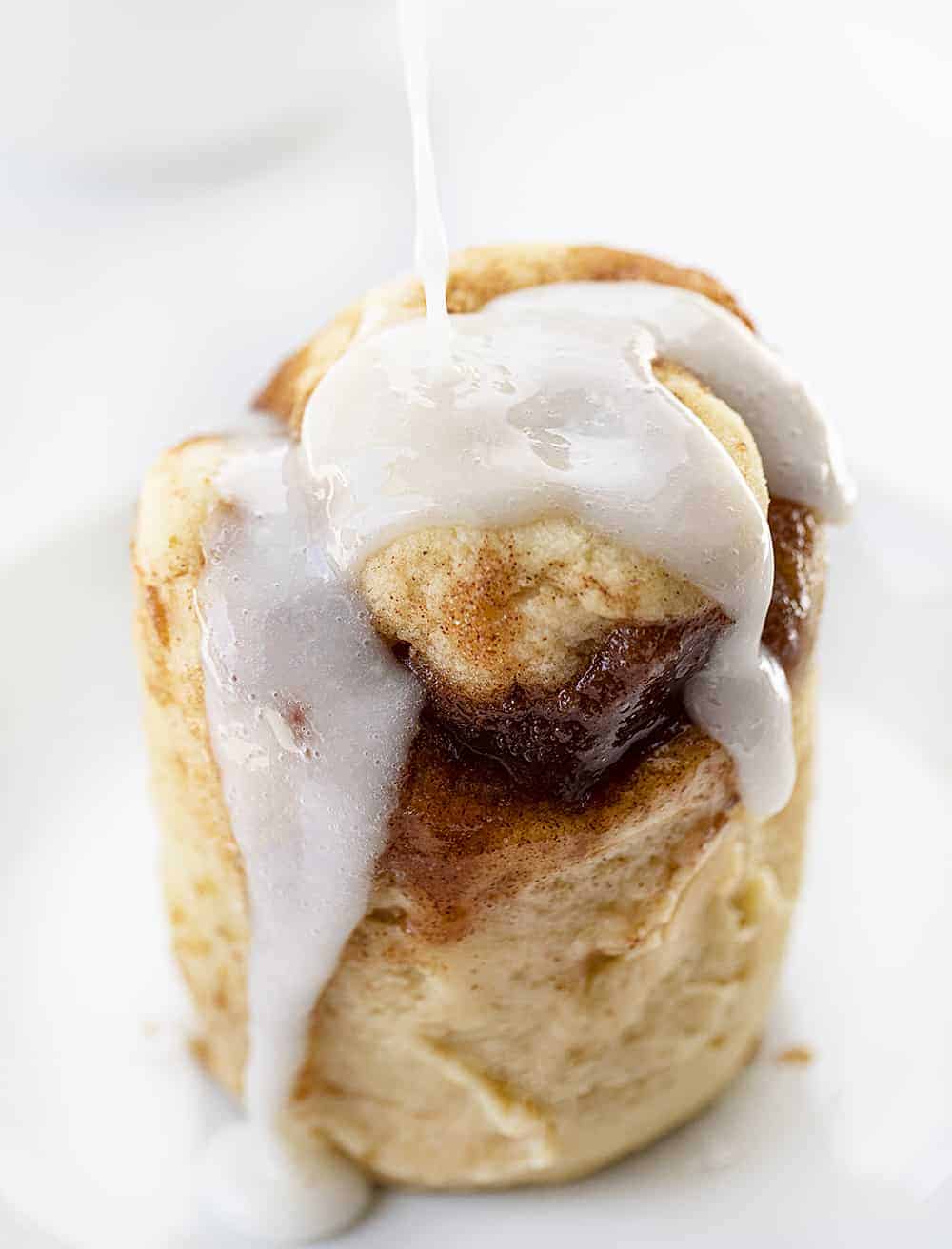 The video above is from @jellybean.celine on tiktok. She calls it a “quarantine cinnamon roll” and says there is no baking required! It’s a cute little video and I can certainly appreciate the creativity and effort. 🙂

I definitely had my doubts from the get-go with this recipe… but definitely wanted to see if she could prove me wrong. I mean, the second I saw her add baking soda I knew there was going to be an issue! Most bakers know that baking soda will yield a bitter taste unless countered by the acidity of another ingredient, such as yogurt, chocolate, or buttermilk. This recipe had none of that, so it was bound to fail. But a few people commented it was so good, so I just assumed I was wrong. 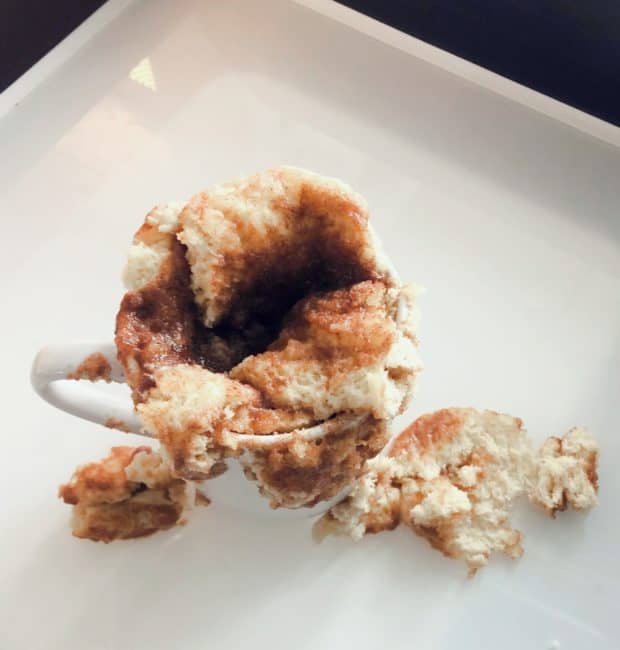 Here is her recipe and the instruction: (Please scroll to the bottom to the recipe card for the ACTUAL recipe you should use)

How did it turn out? Sadly, INEDIBLE. Literally just tasted like burnt baking soda. In fairness to her, I had to guess on amounts for something things so I could have messed up.

I decided to take her recipe and compare to my basic cinnamon roll. Then I decided to add some baking powder and use less baking soda and less cinnamon.

Again, inedible. And made a huge mess. (Picture above) And made me sad that 1.5 million people were going to make this and get such awful results. But I knew I could make it better, so I tested it 9 more times and finally came up with the perfect recipe!

DO NOT USE BAKING SODA. It should be baking powder. 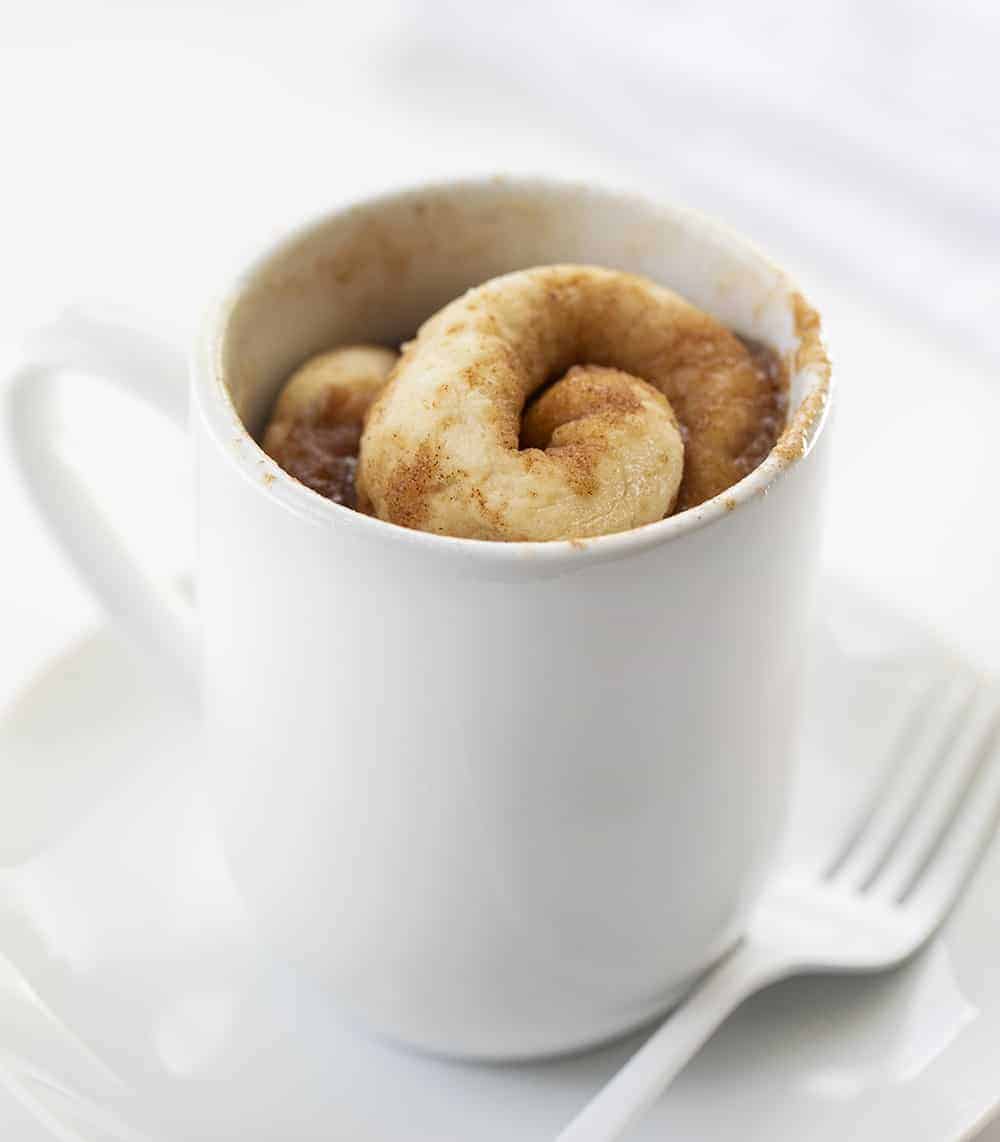 TikTok Cinnamon Roll in a Mug

When done properly, this is actually a pretty good craving buster. If you just have to have Cinnamon Rolls, it will certainly do in a pinch!

Use a smaller, or standard size mug. A large mug will produce a flat cinnamon roll that will be gooey on the inside and hard on the outside. Not fun.

Be sure to spray your mug with non-stick spray or coat with butter and dusted with flour. Having the cinnamon roll stick to the sides makes it harder to eat and might even make the edges really tough as opposed to soft.

Get out all your ingredients before starting. There are a few different steps with a couple of different bowls and while the recipe as touted as “easy” there are just as many steps involved as when you make regular Cinnamon Rolls.

How to Make a Cinnamon Roll in a Mug

Begin by melting 1 1/2 tablespoons butter in your microwave. In a small bowl add flour, baking powder, granulated sugar, milk, and vanilla. Mix together well until you have a fairly loose dough. It is not solid like a traditional cinnamon roll dough, but you can “firm” it up enough to use but having a dusting of flour on your clean counter.

Scoop the dough onto the counter and then sprinkle more flour over top and on your fingers. Gently flatten the dough (checking to make sure it isn’t sticking) into a long rectangle. Mine was about 10 inches long, but it just needs to be a minimum of 6 inches and about 1/2 inch thick.

Melt the butter, brown sugar, and cinnamon together for 60 seconds and stir well. It will technically be melted together in about 40 seconds, but the brown sugar will not break down much more when microwaving the cinnamon roll so I like to microwave for 60 seconds. (Cover your bowl with paper towel to avoid making a mess.)

Lift up the dough to make sure it’s not sticking to your counter, then flatten again. Pour the butter and brown sugar mixture over top and smooth out.

Roll the dough into a cinnamon roll and place it into your greased mug.

Microwave for 90 seconds. If after 90 seconds the dough appears wet on top, put it back in the microwave for 10 seconds and continue to do that until it no longer appears wet. Everyone’s microwave is different so I recommend making 1 cinnamon roll in a mug, seeing how it works, then you will know how much time it needs in the future. 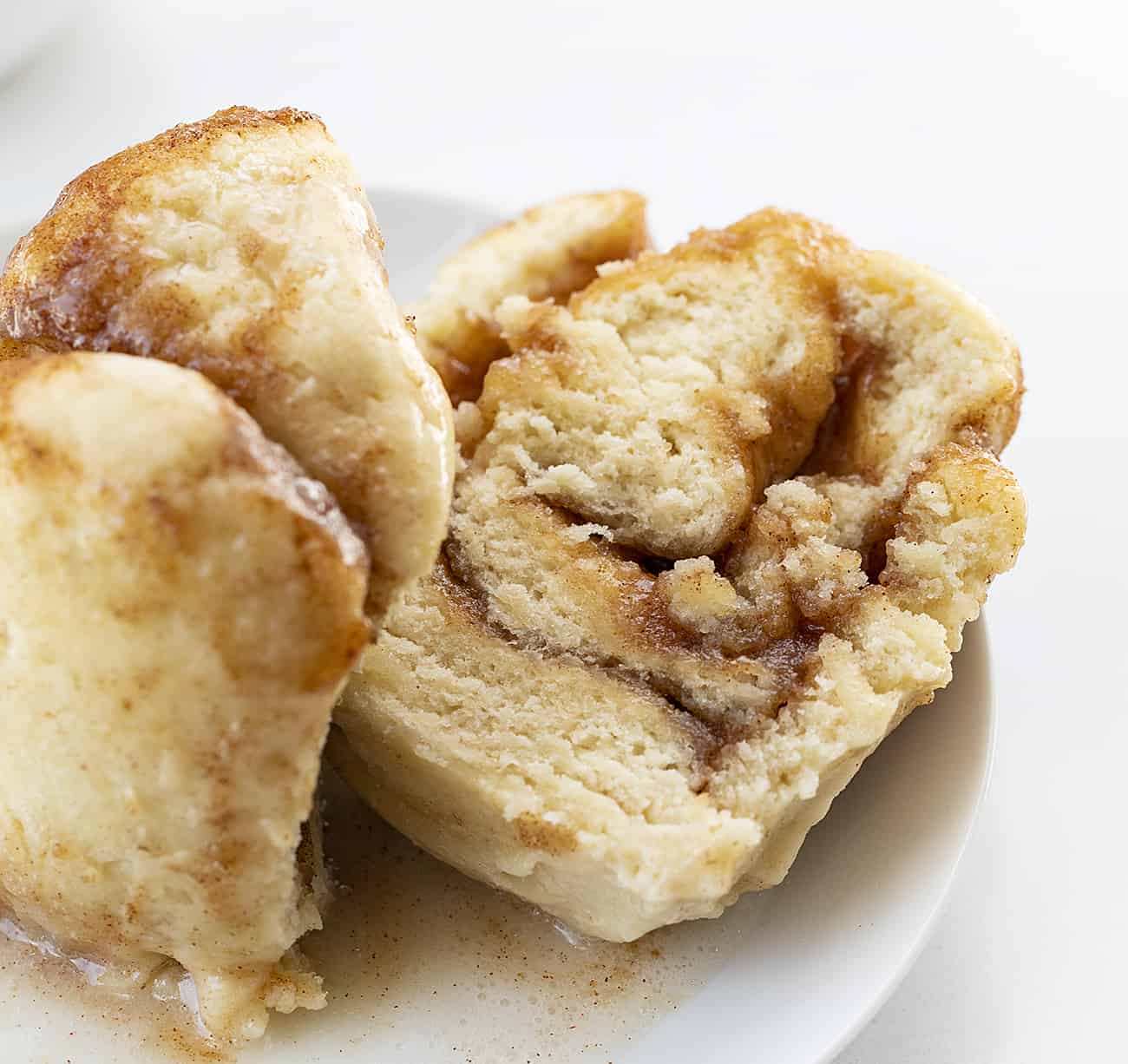 While the cinnamon roll is in the microwave, grab another bowl and stir together confectioners sugar and milk. This will be your glaze. You can make it as thick or as thin as you would like!

When the cinnamon roll is done, carefully remove from microwave. You can either pour some of the glaze over the top while it is in the mug or remove the cinnamon roll to a plate. If you leave it in the mug it will stay hotter longer, which also means it will need to be eaten slower. 😉 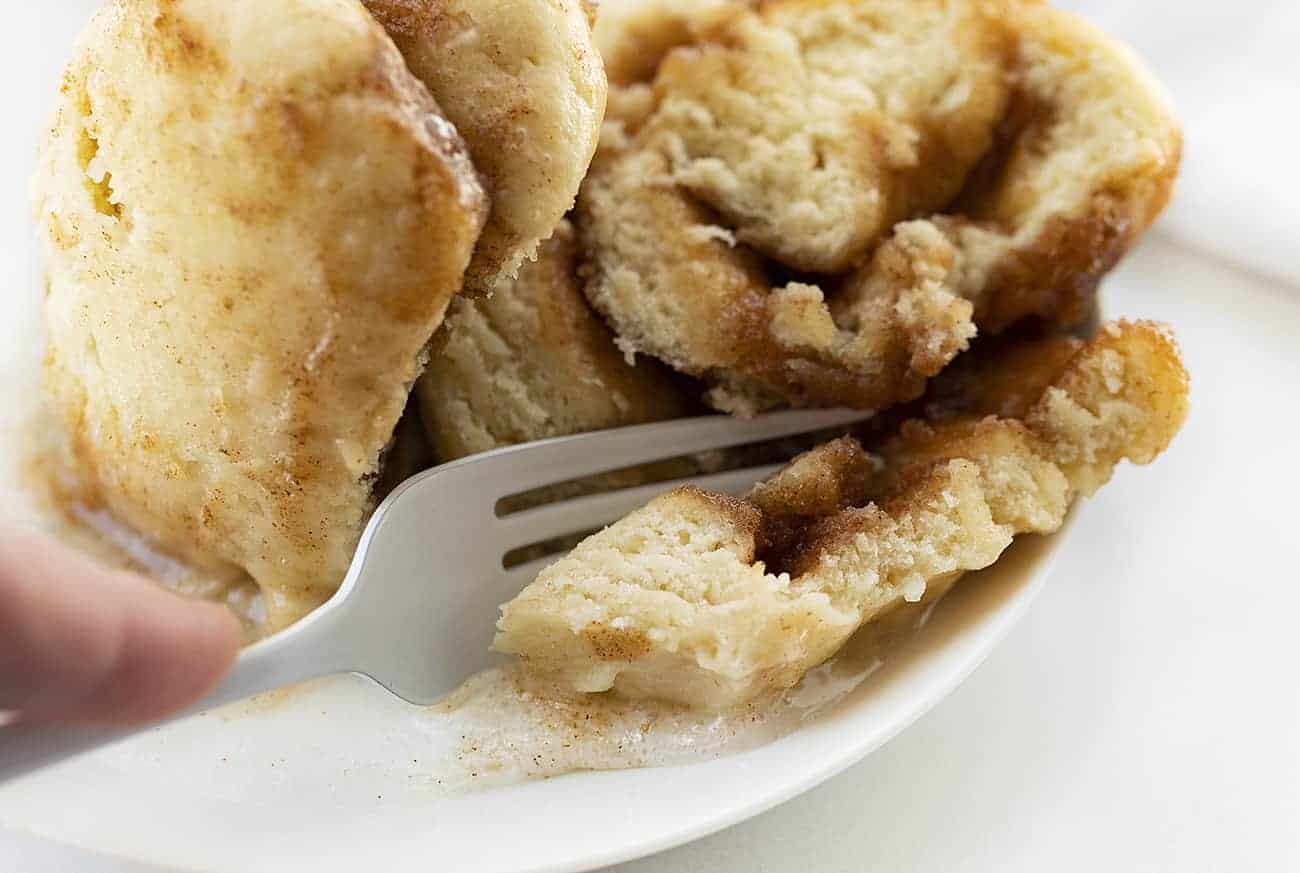 How Does TikTok Cinnamon Roll in a Mug Taste?

Well, if you use her recipe, you might be disappointed. If you use the recipe below, I think you will be pleased! I have made enough of these now to know it can work, and when using a solid recipe, it can actually even taste good. 🙂